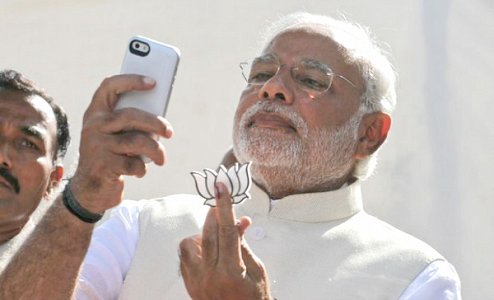 As the rest of the world grimaces under various uncertainties – China’s economic slowdown, the possibility of the UK leaving the European Union, ghastly international terror strikes – many Indians are today feeling quietly confident. Those that read the financial pages that is. For it has just been announced that the subcontinent has cemented its status as the world’s fastest growing large economy after expanding by 7.9 per cent in the first quarter of the year 2016.

As neighbour China continues to slow down, hopes for an emerging market surge shift to lift the global economy fall on India, whose 1.3 billion people are driving domestic demand energetically. In the great Asian Derby, the Sacred Cow overtook the Imperial Dragon 15 months ago and has steadily widened the gap. This surge was due to a splurge. The large Indian domestic consumer market has proved more resilient than China’s export-led model, which slipped to 6.7 per cent growth in the same quarter.

Some of the credit must go to Narendra Modi. Since sweeping to power two years ago on a promise to reboot the economy, this controversial figure has outstripped expectations. Spending on defence and infrastructure has been beefed up (well, perhaps not beef exactly) and Modi has pushed through tax and labour market reforms. Importantly, the bankruptcy law is being overhauled and the central bank, under Raghuram Rajan, a former chief economist at the International Monetary Fund, is being modernised. Interest rates have been cut by 1.5 percentage points since January last year, down to 6.5 per cent, which is the lowest in five years, and this has boosted household spending.  These new figure suggest that the economy is accelerating faster than had been thought. The latest quarter showed a marked improvement on the 7.2 per cent growth delivered in the final three months of 2015, and was higher than the forecast of 7.5 per cent growth.

However, there are sceptics who doubt the accuracy of these new GDP figures. The statistics office in Delhi changed its methods last year and some believe that the calculations may overstep the reality by as much as 2 percentage points. But even if this were the case, there is no doubt that things are heading in the right direction, largely because of the laxative (herbal of course) that Mr. Modi has prescribed to ease the constipated procedures of government payment and its restrictive bankruptcy laws. Attention to this latter is a long overdue attempt to clear the bad debts that have deterred Indian banks from lending and generally tied up productive capital within companies. Mr. Modi has also tried to stimulate private sector investment by ploughing state money into infrastructure, though with little effect so far. Capital investment fell 1.9 per cent in the quarter compared with 1.2 per cent growth in the previous one. Consumer spending was up 8.3 per cent on year in the March quarter, and with increases in the pipeline for public sector wages and pensions, further growth is expected. All of this no doubt will no doubt help Modi in his meeting with US companies and investors later this month.

Nearer to home as far as we are concerned, the icing on the cake would be if the Modi government began to take tourism seriously and spent some energy and money boosting what has consistently been a seriously undervalued asset. According to official figures, about 22 million tourists arrived in India in 2014, ranking her as the 38th country in the world in terms of foreign tourist arrivals, but this figure is actually meaningless as most of these were non-resident Indians arriving home for a short stay, usually to visit families. In fact, the tiny island of Cyprus (3,572 square miles) gets more tourists each year than the entire Indian subcontinent (1.25 million square miles). Cyprus may be a lovely place, but considering what India has to offer, this difference is almost incredible.  'Incredible !ndia' indeed... But, for the genuine tourists ready and willing to spend their money, punitive luxury and service taxes, prohibitive liquor laws and absurdly complex visa regulations have acted as a very successful disincentive package over the last few years. From the government’s side, a general disregard for tourism’s potential as a valued earner of foreign revenue has been a long-established pattern. For those of us old enough to remember, what is needed is a return to the days when Dr. Karan Singh was at the helm of Tourism India.

Anyway, with those visa hurdles gradually being dismantled and an increasing number of popular international tourist destinations sadly falling prey to terrorist risks - Egypt and parts of Africa being the most recent examples – now would be the time really to focus on boosting this aspect of India’s economy. Not just with empty slogans but on the ground reforms in taxes, incentives and backing. Efforts in this direction could really put a smile on many more Indian faces, and we have to hope that Mr. Modi is too sharp an operator to ignore the vote potential in that sort of approval…