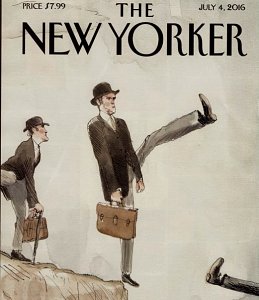 Now you have voted to leave the EU, keep calm and don't worry. The Farrage balloon may have floated off into the wide blue yonder, but in the face of the current political turmoil and icy financial shivers, there is a solution that should relieve both Bremainers and Brexiters equally. A historical moment comes, which comes but rarely, when we step boldly from the old to the new...

Before he leaves office, David Cameron needs immediately to apply for Britain to become a Union Territory of the Republic of India.

Whilst in terms of post-modern irony and historical justice it seems only right and proper to give India a chance to rule Britain for a few hundred years - it actually makes a lot of sense for the post-Brexit British too!

Worried about jobs? India's economy is growing 4 times faster than Europe's and will overtake the entire EU's sometime in the 2030s. Plus, the land of the Maharajahs is all set to become twice the size of the EU economy by 2050. Worried about taxes? Well in India less than 10 per cent of working adults pay them, so all you jammy dodgers can breathe easily on that score. No more need to fiddle around in Jersey, Ireland or the Cayman islands, and anyway Interpol is onto all those traditional loopholes, so its high time to look elsewhere. And all your old favourites - Amazon, Starbucks, Google, Mrs. Philip Green etc. - will love it, so…business as usual.

In economic terms alone every young Brit should wish to replace their garish red EU passport with a classy blue Indian one, and ASAP. This little book is emblazoned with the lion symbol of the emperor Ashoka, surely one of the greatest monarchs ever to have ruled – just, tolerant, powerful – and a fitting future symbolic successor to Elizabeth the Second. He was a Buddhist too, so all very mindful and relevant to our post-Christian future.

Worried about the future of the NHS? Of course you are. But fear not, as India already provides nearly as many doctors to the national sickness service as the EU does - and that doesn't even include those of Indian origin, born or educated, in Britain. The figures for NHS participation are: 25,055 Indian v 30,082 EU. Perhaps a new advertising campaign featuring Peter Sellars and Sophia Loren is in order? Suitably remastered and updated, of course. And perhaps some ancient and relatively inexpensive wisdom from indigenous medical systems Ayurveda and Unani can counterbalance the relentless chemical monopoly of the current NHS model, always vulnerable to the greed of those pharma multinationals? India has a government department promoting these natural systems, and yoga as well – even Prime Minister Modi does his 'downward dog', and in public too. Follow that, Theresa!

Worried about cultural and ethnic diversity? With 16 major languages, 220 minor ones and 850 dialects spoken every day by all manner of skin colours and adherents of every religion on earth (many of whom came here as refugees), the sub-continent has been a proven expert in multi-culturalism for over two thousand years. None of those forehead-lining seminars and worthy governmental initiatives needed here, even the most politically correct Brit would marvel at the diversity spontaneously flourishing on every street corner.

Worried about being understood? English is one of India's two official languages - which will be a huge relief for all those who have struggled fruitlessly to communicate with their congenitally hard-of-hearing continental neighbours for all these years. No more bellowing at those obdurate French to try to make them understand us, just a little refined tweaking of the inner ear to enable it to resonate with the charming nuances of Indinglish is all that is needed.

Worried about not being part of something bigger? It seems size does matter after all, guys, but fear not! Within its one and a quarter million square miles, India has more than twice the population of the EU. Half of these are under 35, so lots of creative, tech-savvy energy waiting to be unleashed and the bonus is: no more worries about an ageing population! And anyway, for those of us who have somehow made the error of ageing, let’s not forget that in general Indians are still pretty conscientious in looking after their ‘aged P’s’ …

Worried about where to go on holiday? The Himalayas are nearly three times the height of the Alps and thousands of miles longer, so skiing, paragliding, walking and romancing amidst the pine tree slopes are all there just a car ride away. Also there are more sandy beaches along India's coastline than all the Costas you can dream of, and with gems like Neeleshwar Hermitage in Northern Kerala, there’s no need to look any further. What is more, India has tropical rainforests and even a desert too! Plenty of visa-free inter-railing adventures are there waiting for you on the world's largest railway network, whose generally smooth functioning and dedicated staff makes those bolshy types at Southern Rail and London Underground look like prehistoric throwbacks to the dark days of 1970s industrial turmoil.

Worried about no longer being ruled by an unelected bureaucracy in a far-away land? We've got that covered as well! Nowhere on the planet has perfected the bureaucratic sclerosis, shuffling of paper, drafting and enforcing of endless and pointless rules more than New Delhi. Permits? More than your wildest dreams could conjure up. (Nightmares too). What’s more, India's civil servants salaries are more than 10% lower than those in Brussels and unlike the EU with its farcical Brussels-Strasbourg split, at least the subcontinent has her Parliament and legislature in the same country. Talk about getting more for less! Go for it you mandarins!

In fact, British MPs, the whole of Whitehall, the House of Lords and even the Royal Family (subject to the return of the Kohinoor diamond of course) can all be pensioned off at the rapidly expanding and internationally renowned Best Exotic Marigold Hotel chain in Jaipur. Lord John ‘Two Jags’ Prescott could revisit his Cunard days by overseeing the dining and taxi services and the self-styled ‘great and good’ can spend their sunset years bathed in the warm glow of nostalgia. After all, The Old Country always seems so much more agreeable when viewed from afar after a couple of hefty ex-pat sundowners…

This bold move would at one stroke free up the Houses of Parliament, Buckingham Palace and much of Central London to become a permanent Bollywood film set. With more films and many more viewers than Hollywood this is sure to help keep London's tourist economy going, which within a decade or two will be mostly Indians anyway. Plus, we can still retain vital aspects of our cultural integrity: e.g. butter chicken masala will still be the Brits’ favourite dish.

So, all you shell-shocked members of the Disunited Kingdom, (henceforward to be known as Poundland) this is your big chance to embrace the 21st Century and the future! Goodbye Brussels, Hello Delhi! Bid farewell to Little Europe and Namaste to Incredible India!

With many thanks to Nick Booker