The Air India phoenix set to rise from the ashes. 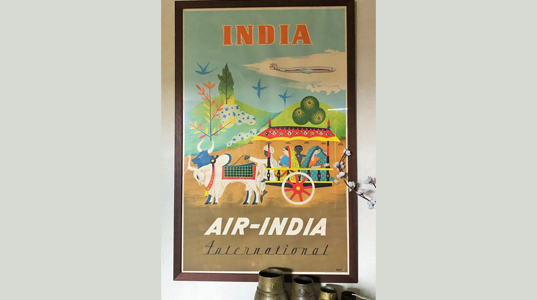 In an instance of reincarnation worthy of the Mahabharata, The Tata Group is to return as the boss of state-owned Air India after an absence of 68 years. The national carrier has long been ailing and currently loses a whopping £2 million pounds each and every day, but with Tata back at the controls, hopes in the industry are high that the airline is set to take off into sunnier skies once again.

The return of Tata in the cockpit will complete a historic circle that began way back in 1932 with its fledgling airline’s first domestic flight from Karachi to Bombay. Then, in 1948, the government, stepped in and nationalised.

And now, almost seven decades later, a government with a very different economic outlook has taken the momentous step to reverse that decision. Finally ending its long search for a buyer, it is selling its equity to Tata’s winning bid of £1,750 million. Of this, 15% will go to the government and the rest towards clearing the airlines massive debts, reckoned to be in the region of £650 million. The deal includes a 100% stake in Air India and low-fare unit Air India Express as well as a 50% stake in ground-handling firm AISATS. As part of privatisation conditions, the Tata Group will effectively take on a fourth of Air India's total debt and pledges to hold on to at least 51% of the carrier for a year and keep 12,000 of the carrier's employees for the same time. It also agrees to stick to a business continuity clause for three years and retain the brand for five years.

"In my view this should have happened at least a decade back if not earlier. It's a landmark and historic decision in the interest of all stakeholders, which will have a salutary impact on the aviation sector," said Sunil Arora, former CMD, Indian Airlines and Air India.

In the early days under government control, Air India did not feel its wings to have been clipped. In fact it flourished. In 1960 the first jets were introduced into the fleet, which two years later was all-jet. International travel was growing healthily and the future looked as rosy as the sun rising and setting seen from 30,000 feet up. But by the late 70s, darkness had begun to descend. With a terrible predictability, India’s bureaucratic tendrils were winding themselves around even its fanciest aircraft and complacent management, overstaffing and plummeting standards began to take their toll. Any of us old enough to have flown AI in those days remember the delays, not helped by the interminable check-in queues as passengers checked in huge amounts of overweight hold baggage comprised of goodies not available at home. Once on board there were the rattling doors, broken seats and harassed staff presiding over an unkempt cabin that too often sounded more like a maternity ward than an aircraft. Elegant sarees and good vegetarian options were no longer enough to charm sophisticated international flyers. Sexy Thai Air (‘Smooth as silk’) rapidly became the cool alternative to fly into Delhi, while Singapore Airlines (‘A great way to fly’) would waft you into Mumbai with the irresistible combo of charm and efficiency. British Airways ran a good service to several Indian destinations, and other international carriers were circling too, hungrily looking for a slice of the action.

On top of this, in 1978 Air India’s image suffered a huge dent with the fatal crash of a Boeing 747, an event which saw the then Prime Minister Moraji Desai relieve J.R.D. Tata of the airline chairmanship, a position he only regained in 1986. Things continued relatively smoothly until the 2007 merger with the domestic carrier Indian Airlines. Stretched in too many directions, trying to service and subsidise money-losing routes, the company was also facing competition from smart new domestic kids on the runaway, such as Indigo. Over the years, several of these have come and gone. Indigo still has over 50% of the domestic market but it, along with the others that have survived – Vistara, Spice Jet, Go First – have been devasted by the pandemic.

There is no denying that the government’s decision is highly significant and many see it as inaugurating a more general programme of privatisation marking as it does the government’s first significant asset sale since 2004. "I may be accused of overstating the importance of this event but I think this divestment amounts to a 'reset' of the Indian business environment. Yes, the Govt. is dispensing of a cash drain; But it's also renewing faith-after decades-in the potential efficiency of the Pvt. Sector," tweeted Anand Mahindra, the chairman of Mahindra Group, the leading aerospace company. He should know. When it was being widely rumoured that he would buy the late lamented Jet Airways, he sardonically replied: ‘Remember the quote: “If you want to be a millionaire, start with a billion dollars and then start (buy) an airline!”

The revival of Air India may well be a chance to celebrate the return of brand India firmly into international prominence, up there with the best. The religiously inclined, though, may see something even more auspicious going on. This return to savvy management could signal the rebirth of the legendary viman or aerial chariot of the gods described in much-sacred literature. The best-known example is the pushpak viman ‘the flower-bedecked transporter’ described in the Ramayana. This flying throne belonged to Ravana, the demon king of Lanka, but he had stolen it from Kubera the Lord of Wealth. Thanks to divine intervention it was eventually returned to its rightful owner by no less a person than Lord Rama himself. Is history repeating itself?