A recent article in the Indian Express tells us of a super-smart Australian octopus that was discovered on the sea bed carrying around a coconut shell as a shield to protect itself. According to experts at Melbourne’s Victoria Museum, this is the first recorded case of an invertebrate’s using tools – a major indication of evolutionary intelligence originally thought to be the monopoly of humans, but now known to be found in other primates, mammals and birds.

Evolution has certainly favoured the survival of the coconut palm, as the nut can float on water for months and travel vast distances before washing up on some distant shore and happily germinating. Such mobility makes it impossible to trace its geographical origin, but cocus nucifera has certainly been cultivated here in India for over 4,000 years. South Indians in particular have always appreciated the nut’s value: ancient texts laud it as the fruit of theKalpavriksha ‘the wish-fulfilling tree’ and there is a hymn in Tamil listing no less than 108 beneficial uses.

A healthy palm can live as long as a human, and every part is used in some way or another in the daily life of coconut growing areas, of which Kerala is the foremost. The ‘water’ inside the tender green nut provides a refreshing and nutritious drink, high in vitamins and minerals, especially potassium. (This why the nuts were used as drips in wartime hospitals throughout south east Asia, providing hermetically sealed sources of instant rehydration and nourishment). The firm white flesh is also rich in nutrition  and calories; grated and pulped it is a staple ingredient of local cuisine.

Cut plant stems yield the sweet juice used in palm sugar, while the fermented sap produces toddy, the traditional local hooch. Once made, toddy should be quaffed within hours, as it soon goes off and the taste rapidly deteriorates to become vinegary. 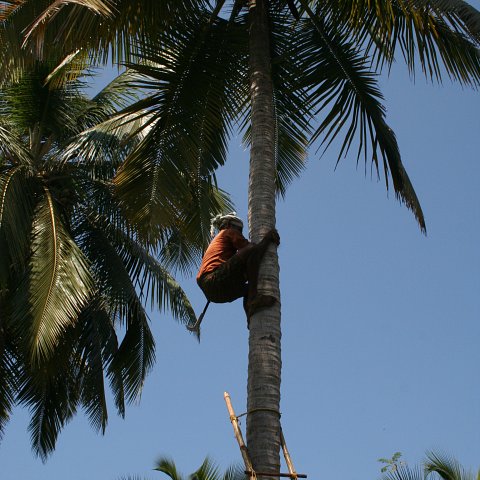 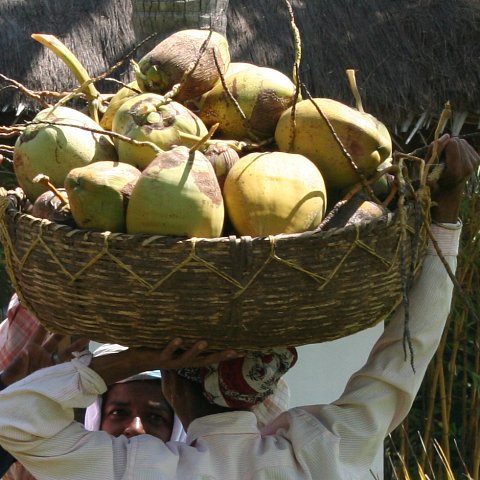 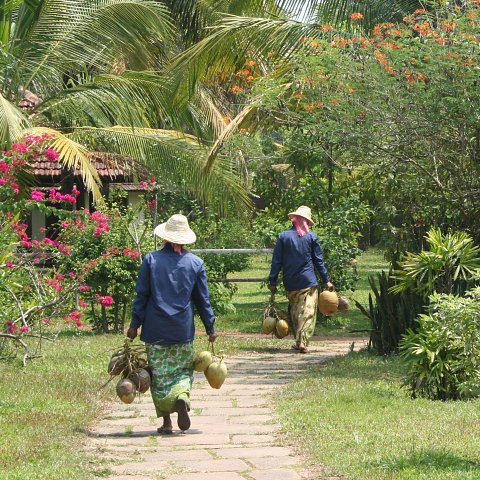 Oil extracted from mature coconut plants has always been used for cooking; modern research shows it is high in good cholesterol and the constituent lauric acid gives the body instant energy by going straight to the liver, like a carbohydrate. Coconut oil is used everywhere: in chocolate, ice cream, pastries, ointments, toothpaste, soap, Ayurveda products, candles, dyes, paints, lubricants, plastics and even insecticides. Pulped residue from the oil extracting process is used as cattle fodder, stimulating healthy milk production in cows, and also as manure for trees and plants.

The palm leaves make roof-thatch and mats, and their midribs become good brooms, while the trunk of the tree is used in building and furniture making. Nut husks are a slow burning and virtually smokeless fuel. The shell is fashioned into cups, spoons and ladles; when burnt it produces a charcoal that is used in many filtering systems, from gas-masks to cigarettes! And their water-resistant qualities make two coconuts tied together an effective pair of water-wings for Malayali kids learning to swim. And then there is the coir. This outer, fibrous husk is soaked and beaten off the nut, cleaned and spun into yarn which is then used for rope, brushes, doormats, rugs, mattresses and pillows. Kerala accounts for 75% of India’s coir production, the area around Alapuzha, formerly known as Allepey, being the centre of the industry.

The mythology surrounding the coconut is as ancient and dense as the groves in which it grows. A prime symbol of fertility, it is often kept in a shrine and presented to women desiring to conceive. One of its Sanskrit names is narikela‘man-fruit’ and it has long been seen as a symbolic substitute for the human head. Traditionally carried into the temple on the worshipper’s head (the highest and most spiritual part of the body) and then offered to the deity, the nut has the symbolic potency of a blood sacrifice but without the ritually polluting and low-caste associations of such a primal offering. If presented to an image, it must have its tuft intact, for this symbolizes the tuft of human hair. It is believed that the coconut, naturally sealed from impure influences, is the purest of offerings, and south Indian temples in particular are full of sudden cracking sounds as they are smashed on the stone floor, particularly in front of an image of Lord Ganesha to invoke his blessings of good luck. Such smashing should not take place in front of a pregnant woman however, as it is believed that a similar fate might transfer to the head of her unborn child.

The coconut is also closely associated with Shiva, Lord of Transformation, as its three ‘eyes’ resemble the three-eyed deity.

There is a special day that perhaps dimly records the coconut’s maritime travels. Each year the festival of Narili purnima, held on the full moon of the lunar month of Shravana (July–August), honours the coconut and the waters jointly. Sea and rivers are worshipped with mantras and coconuts thrown into them as offerings to the gods, particularly Varuna, Lord of the Deep. Traditionally, this festival was taken to mark the waning of the south-west monsoon storms and the resumption of trade and fishing along the west coast. And whereas the West launches a ship by smashing a bottle of champagne, abstemious Indians continue to prefer to use a coconut.

At its most symbolic, the highly versatile fruit without a seed is taken to represent the entire range of existence: its rough outer husk is life’s gross surface; the soft inner flesh the subtle, angelic realms; the pure milk the causal level and the inner space, the realm of pure unalloyed spirit. So, who knows, perhaps that defended Aussie octopus was also a bit of a metaphysician in his spare time?

Here at The Hermitage, our coconut harvest is well underway, as the accompanying photos show.