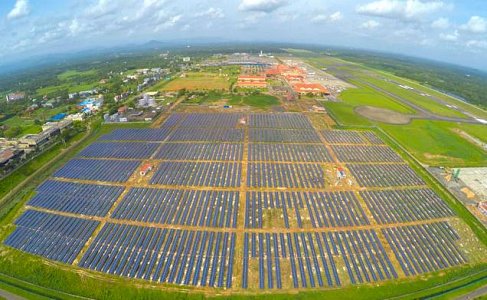 In a move that ís expected to save 300,000 tonnes of carbon emissions over the next 25 years, the state of Cochin in mid-Kerala, on the southwest coast of India has converted its airport to function with 100 percent solar power.

As of May 2016, the airport will run on 46,150 solar panels laid across 45 acres in a nearby cargo complex. Not only will the contribution to the environment be equivalent to planting 3 million trees, it will produce the power equivalent to run 10,000 homes each year.

"Now, Cochin airport will have 50,000 to 60,000 units of electricity per day to be consumed for all its operational functions, which technically make the airport 'absolutely power neutral'," Cochin International Airport Limited (CIAL) says in a press release.

The airport, which is the fourth largest in the country in terms of international traffic, plans to sell any solar power it doesnít use to the local Kerala State Electricity Board and will buy back anything it needs during overcast days or at night. It also announced at a recent press conference that it's looking into other renewable energy sources ñ hydro-power in particular.
"We are also looking at opportunities in generating power through dam-based solar panels and low-head hydro projects by utilising Keralaís natural resources," a CIAL representative said. Given the heavy rainfall here each monsoon season, this seems a feasible option.

According to government sources, India already has 4 gigawatts of solar capacity. Using Cochin as an example, the Indian government has been encouraging other local airports seriously to consider how they can incorporate solar energy into their operations. This is really good news, not least as it represents a spectacular turnaround for a state that previously registered the number zero not for its carbon emissions, but for its ecological awareness.

Ecology and wildlife habitat go together of course, so in celebration of this good news let us have a quick peep at some of the interesting animals that can still be found in the subcontinent. Since earliest times and the tales of travellers in antiquity, India has been known as the land of extraordinary and fabulous creatures. Classical authors such as Herodotus kept their audiences back home in the West agog with tales of what could be met with in the subcontinent: giant ants which guarded the gold-fields of the Indian desert, fabulous half-animal, half-fish sea-monsters such as fish-tailed lions, bears, wolves, rams and even spiny-haired mermaids, enormous dragon-serpents that preyed on elephants, magical unicorns and gigantic white worms which inhabited the Indus river. Such stories were no doubt added to by the richness of Hindu mythology that peoples its temples and stories with an extraordinary array of hybrid creatures. Some of these are deities: Ganesh, the elephant headed son of Shiva, Narasingha a form of Vishnu who is half-man, half-lion or Anantashesha, the giant serpent on which the world rests.  All in all, India seemed a land of unparalleled animal strangeness.

These days the menu is not quite as exotic, but nonetheless, despite the ever-increasing ravages on habitat inflicted by the greedy and needy species that hubristically calls itself homo sapiens (sic), India still has some extraordinary creatures hanging on to their survival. Here are six of them.

This elusive creature lives up trees and comes out at night. As its name suggests the Indian Giant Flying Squirrel (Petaurista philippensis) has folds of skin that stretch between its front and hind limbs that allow it to silently glide through the tree canopy.

The Ganges River dolphin or Susu, lives in what is one of the most densely populated regions of the world, and fewer than 2,000 are thought to remain. Platanista gangetica has a distinctively long slender beak with sharp, pointed teeth. Living in murky estuarine rivers, the dolphin has small eyes and very poor sight; they may be able to sense light intensity and direction but not distinct shapes.

Giant water bugs are among the largest of all the worldís bugs. The species Lethocerus indicus is found in the floodplains of northern India, around the rivers Ganga and Gandal, for example. Adults often grow to more than 8 cm long and can inflict a painful bite. They are so large they frequently prey on vertebrates including fish, amphibians, snakes and baby turtles. (It is not found on the coast of Malabar!)

In some ways the most visually striking of all the crocodilians, the Gharial (Gavialis gangeticus) has long, narrow jaws lined with rows of razor-sharp teeth. Males use the bulbous growths on the tips of their snouts to generate buzzing and snorting sounds to attract females and warn off rivals. They can reach 6 metres in length. A century ago they could be seen on around 11,000 kilometres of rivers across much of the northern Indian subcontinent, but this plummeted later in the 20th century and by the 1970s there were thought to be as few as 200 left in the wild. In 1975 the Indian government launched the Crocodile Project to protect the Gharial.

Red pandas roam the Eastern Himalayas. Small, cute and funny, red pandas flummoxed scientists for years, as they couldnít decide how they were related to other species. It now seems that red pandas form their own phylogenetic family, alongside skunks, raccoons, and mustelids. Though unrelated to the giant panda, red pandas also sport a false thumb, which is actually an extension of the wrist bone. They are also primarily vegetarians, their diet consisting almost entirely of bamboo leaves, bamboo shoots when in season and the occasional fruit, flower, and (rarely) an odd egg or bird.