Eat and be healthy 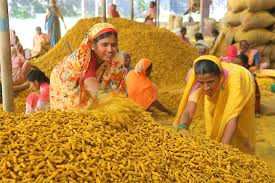 Over the years, researchers have been learning more and more about the health benefits of turmeric and its active component, curcumin. The root we know as turmeric has been used for well over 2500 years in India, and is a staple of much of the food we offer at The Hermitage, so perhaps it’s time for an update with links to the latest studies.

1) BRAIN TUMORS
One of the biggest health benefits of turmeric is in the prevention and treatment of cancer. Research has found that curcumin induces cell death in medulloblastoma, a pediatric brain tumor. Other studies have found that it may induce cell death in glioblastomas, an aggressive type of brain tumor that is resistant to chemo and radiation.

2) PROSTATE CANCER
One study found that turmeric, when combined with cruciferous vegetables, may prevent prostate cancer and stop or slow the growth of existing prostate cancer.

4) LEUKEMIA
Curcumin was found to have an inhibitory effect on WT1 gene expression in childhood leukemia cells. A study on Chronic Myelogenous Leukemia (CML) at the University of Palermo in Italy found that mice treated with curcumin developed smaller tumors than the control group.

5) MULTIPLE MYELOMA
A French study published in 2014 in Cancer Biology & Therapy found that several different multiple myeloma cell lines were sensitive to curcumin. The study authors concluded that the results indicate more clinical trials are worth doing on curcumin and multiple myeloma. MD Anderson Cancer Research Center at the University of Texas has been studying the effects of curcumin on multiple myeloma for several years. For an interesting anecdotal story of a woman with multiple myeloma who has been keeping her cancer at bay for years using MD Anderson’s curcumin protocol, check out Margaret’s Corner.

6) METASTASIS PREVENTION
Multiple studies have found that one of the most exciting health benefits of turmeric is the prevention of metastasis, the spread of cancer from the primary site to other areas of the body.

8) CHEMOTHERAPY ENHANCER
Researchers at UCLA found that curcumin enhances the effects of cisplatin, a chemotherapy used in the treatment of many different cancers. Cisplatin and curcumin together worked better at suppressing tumors than cisplatin alone. In addition, a study published in the Nutrition and Cancer journal found that curcumin not only makes cancer cells more susceptible to chemo but it also protects healthy cells from the toxic effects of chemo.

9) ALZHEIMER’S PREVENTION
One of the most exciting turmeric benefits is in the realm of brain health. It has long been noted that elderly people in India have low rates of Alzheimer’s disease. One reason may be that they consume a lot of turmeric in their diets. A study found that curcumin may prevent or slow the progression of Alzheimer’s disease by removing amyloyd plaque buildup in the brain.

10)EYE HEALTH
A study at the UC San Diego found that curcumin may be able to treat some types of retinitis pigmentosa, a degenerative group of eye diseases that can lead to blindness. Another study found that it may be helpful in the treatment of macular degeneration.

12) NATURAL PAINKILLER & ANTI-INFLAMMATORY
Curcumin is a natural painkiller and cox-2 inhibitor. One study compared curcumin to ibuprofen for pain relief in knee osteoarthritis patients and found that the curcumin worked just as well as ibuprofen. Several studies have found that curcumin has potent anti-inflammatory properties. According to the Arthritis Foundation, several studies have found turmeric to be effective at reducing joint inflammation and pain, with one of the studies even finding curcumin to be better at reducing pain and swelling in patients with rheumatoid arthritis than diclofenac, an NSAID that is commonly prescribed for people with RA.

13) LIVER HEALTH
Is your liver taxed to the limit? One of the health benefits of turmeric that is believed to be a natural liver detoxifier. One study found that it may protect against alcohol-induced liver damage as well as damage caused by a high fat diet.

14) PARKINSON’S DISEASE
Curcumin crosses the blood-brain barrier and is a known neuroprotective agent. Several studies have found that curcumin may be beneficial in the treatment of Parkinson’s disease. According to Michigan State University researchers, curcumin can prevent clumping of a protein that leads to Parkinson’s.

15) MULTIPLE SCLEROSIS
Curcumin has shown promise in slowing the progression of multiple sclerosis. A study at Vanderbilt University found that curcumin prevented the onset of an autoimmune disease in mice that is similiar to MS in humans. In fact, the study authors said that MS is a rare disease in India and China, where turmeric is consumed on a regular basis.

16) PSORIASIS HELP
Oral curcumin has been shown to be effective against psoriasis. The National Psoriasis Foundation recommends turmeric as a natural remedy for psoriasis.

18) H. PYLORI
Curcumin has been found to stop the growth of H. pylori (helicobacter pylori), a bacterium that is found in the stomach and other parts of the body. If left untreated, it can lead to stomach ulcers and stomach cancer.

19) BETTER SLEEP
Curcumin may protect against the effects of sleep deprivation. A study found that it prevented anxiety, oxidative damage, and other impairment in mice deprived of sleep for 72 hours.

20) ANTIBACTERIAL
Several studies have found that curcumin has antibacterial properties and is useful in disinfecting cuts and burns.

Turmeric can be taken in powder or capsule form. Capsules are usually sold in 250-500 mg increments.

Once you start using turmeric on a regular basis, it’s fun to find new ways to use it in recipes – for example add a pinch of it to egg salad. It adds a nice flavour and gives the egg salad a rich yellow hue. One thing to take note of is that research has found that consuming black pepper with curcumin increases its bioavailability for the body.

Contraindications: Turmeric should not be used by people with gallstones or bile obstruction. Though turmeric is often used by pregnant women, it is important to consult with a doctor before doing so as turmeric can be a uterine stimulant.

So are you ready to enjoy the benefits of turmeric? Happy, tasty and healthy eating !