Thousands throng the Kannur Airport ahead of its inauguration in December 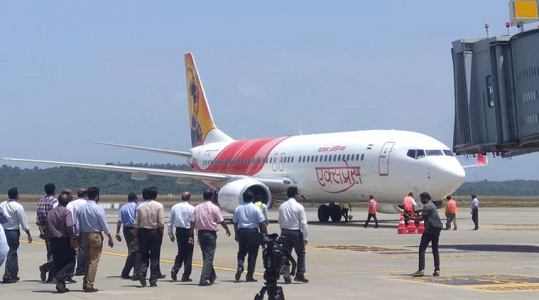 A new type of sightseeing has been taking off recently down here in Kerala: Airport Viewing! The Kannur International Airport Limited (KIAL) opened the terminal to the public for a week as an opportunity for them to gain a sneak preview of what is the state's latest major infrastructure project.

Thousands of men, women and children turned up as the spanking new facility was open to public gaze for a full week. And very impressive it was too, offering these day-trippers a unique multi-destination experience: conveyor-belt cruise, check-in desk chill-out and sales-counter safari all in one. In fact, it was a run(a)way success!

Normally airport queues are a crashing bore, but the scores of visitors were happy to wait in line to fit in with the 10am - 4pm opening hours. Proper photo ID cards were checked and the crowds were well managed. There was plenty of space for parking, but very wisely, the authorities put a ban on food and drink being brought into the spotless premises. That way, a possible dosa-disaster was avoided, and there was no chance of a curry-catastrophe.

Because of the recent floods in the southern and hill areas of the state, the date of the airport’s commercial opening has been temporarily postponed but it is set to be inaugurated with all due ceremony in December. It will no doubt be a typical Kerala function: visiting dignitaries, many garlands, lengthy speeches and a slap-up meal afterwards are assured, now that the Director General of Civil Aviation (DGCA) has finally granted the license. An Air India flight did a test landing at the airport last month and the runway was used by a Dornier aircraft to transport supplies and relief material during the floods.

The airport, 30 km from Kannur town itself, will be a big boost for all the people of the area, who have had to depend on either the Kochi or the Mangalore airports until now. And of course, we at Neeleshwar Hermitage and Lotus Houseboat will be greatly benefitted, as our guests will have an easier and quicker journey to reach us than is presently the case. Built on a public-private-partnership (PPP) model, it will be the fourth international airport in the state, a fact which bodes well for future tourism in Kerala.

All in all, it looks like the sky is the limit!

“A perfect distillation of what so many Westerners from E. M. Forster and Allen Ginsberg to the Beatels, have come to India in an attempt to find: an escape from the pressures and frenzied pace of life"