The Remarkable Story of Covid 19 in Kerala 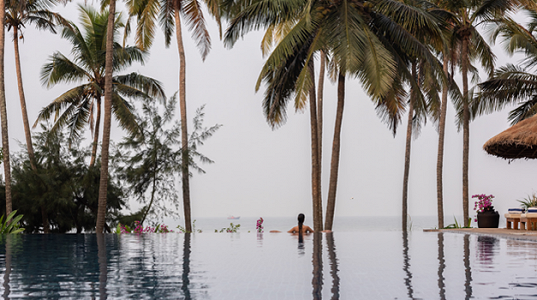 As we all know, Kerala is a mecca for tourism: people come year-round from all over the world, and one reason for such visits is the large number of Ayurvedic healing centres in the state. Kerala has an ancient history of healing, prevention-based treatments, and herbal medicines, which has been preserved partly due to the state’s geographical isolation from political and military turmoil that historically disrupted the rest of the sub-continent. Today, there are more than 20,000 practicing Ayurvedic doctors(vaidyas)working here.

Kerala tradition says that even Mother Earth Herself is blessed with the gift of healing. And COVID 19 has demonstrated the magnificence of that healing grace. Kerala, with a population of 36 million, was the first Indian state to have COVID cases, with many Indian students returning from Wuhan in China where the virus began. In the last two months, 418 people have been infected by the virus in God’s Own Country, with most of the cases were brought in by foreign tourists, but remarkably, it does not seem to have spread. In addition, Kerala's 70% recovery rate is the highest in India and the highest, outside of China, in the world. To date, only two people from Kerala have died from the virus, and as of yesterday, there isn't a single COVID 19 case left in the hospitals of southern Kerala.

So what happened here? The state government quickly adopted a protocol which included a lockdown, everyone wearing masks, two-week quarantine for all tourists coming from outside of India, and most importantly, a vigorous immune protection program organized by the Ayurveda Association. This distributed prevention-based knowledge and herbal formulas for strengthening the immune system to hundreds of thousands of people. Those Ayurvedic herbal medicines included special formulas for older people, for those in the police and health care professions dealing directly with those infected, those who were quarantined, and other unique groups that needed attention.

To put Kerala's two deaths and 418 victims in perspective, Kerala's population is nearly twice that of New York State, and in an area substantially smaller than NY, while Kerala and New York both have some areas of extreme population density, and huge numbers of foreigners coming and going. The Kerala and Indian central government response has been rapid, intelligent, and effective, but what lies behind the astronomical disparity between the COVID 19 impact in America and a large state such as Kerala? Local vaidyas who have worked extensively with Westerners cite many reasons why American and European cases are so high while acknowledging that India, of course, especially its huge, crammed cities face substantial challenges battling the spread of the virus.

Some of the differences between the countries noted by the vaidyas are:

All of the above lead to inflammation in the body, which is found to be the basis of many of these modern diseases. Surveys show that older Americans have anywhere from 5 to 8 prescriptions per person, and there is zero research, understanding, or acknowledgment of the problems that emerge from interactions between multiple drugs.

Here are a few suggestions from an Ayurvedic perspective offered by the PriyaClinic at Neeleshwar Hermitage, to help you stay safe in these trying times:

There is a growing recognition of the influence that our feelings and attitudes have on our immune function. So: Think positive. Be as happy as you can be in whatever you do. Research shows that people who practice a genuine meditation (such as TM) have 73% less lung/throat/nose diseases and allergies This is a published long-term study with 2,000 people and a control group, done with a major health insurance company. A follow-up study that included Ayurveda formulas and programs showed an 89% reduction. Any virus or sickness is harder to catch if you have a strong immune system, and if you are doing what you know to keep in balance, in a state of self-care, your chances of contracting are reduced. Ayurvedic physicians feel this virus is to a large extent a lifestyle disease; that means a healthy lifestyle is a goal for prevention.

It is very important not to get overly tired. The body heals itself during rest, and 36% of our lives are spent asleep. Over impulsivity and less empathy accompany sleep deprivation; sleep erases some memories, strengthens the neural connectivity of others, and the rest it provides flushes toxins out of the system, especially during the nightlypitta cycle from 10:00 PM to 2:00 AM., which strengthens the immune system. It is best to be in bed by10 and up by 6 or so.

If this routine is not a part of your current lifestyle, it is ideal to adopt it. You deserve to sleep soundly. So be kind to yourself and research the new-found dangers of sleep deprivation. It is highly advisable to have no screens or even books in the bedroom, which should be a place for deep rest, both physical and mental. Keep the screens out, and make sure cell phones are off. Screens of all kinds excite the brain with 'blue light', whether it is a phone or computer, so it's essential to have some down time. If possible, have pleasant chat, or a short fresh air walk before retiring.

This is extremely important, of course. Eat meals when hungry and avoid eating nor snacking between meals. Ideally, there will be at least 12 hours between the evening meal and breakfast, so that digestion can be complete. Over-eating and undigested food in the system cause inflammation, create imbalances, and weaken the immune system.

Do not take cold or iced drinks with meals, as they dilute ‘the digestive fire’ making it very difficult to digest food. It is preferable to avoid junk food or any chemical contaminated substances.

A vegetarian diet or a vegan diet is generally advisable, but for everyone, a diet of varied fruits and vegetables strengthens the gut biome. The Indian or Mediterranean diets are good examples. Choose as many vegetables as possible and vary them during the week as much as you can. Along with the usual proteins Ayurveda recommends, ¾ of your plate should be greens and assorted vegetables. If you can include some form of a probiotic drink, so much the better. The more varied the ingredients and spices, the more diverse the intestinal bacteria will be.

A walk or fast walk for 20 min or more daily, or at least 3 times a week. You can walk fast, or even sprint in intervals if you wish. Regular Yoga practice daily is highly recommended.

2) Herbal teas made from tulsi (Basil), dalchini(Cinnamon), kalimirch (Black pepper), shunthi (Dry Ginger) and munakka (Raisin) should be drunk once or twice a day. Add jaggery (natural sugar) and /or fresh lemon juice to your taste, if needed.

3) Golden Milk- Half a teaspoon of haldi (turmeric) powder in 150 ml of hot milk -once or twice a day.

Sip warm water throughout the day. Daily practice of Yoga Asana, Pranayama, and Meditation for at least 30 minutes as advised by Ministry of AYUSH – see: (#YOGAatHome #StayHome#StaySafe) Spices like haldi (Turmeric), jeera (Cumin), dhaniya (Coriander) are all highly recommended in cooking. A simple Ayurvedic procedure is Nasal application (pratimarshnasya): Apply a drop of sesame oil or ghee(clarified butter) in both the nostrils. Then, gently pinching and releasing the nostrils allows the liquid to lubricate the passages. Application in the morning and evening is suggested.