Traditional flavours do us many favours 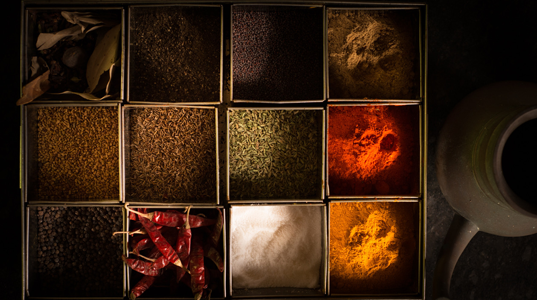 With everyone becoming more health-conscious in the wake of Covid, Western science is belatedly discovering a fact long known by all Indian housewives - the spices traditionally used in curry have beneficial medicinal properties. One of the most benign appears to be turmeric, the bright yellow root, grown all over Kerala’s hills, which gives curry its characteristic hue. Widely used as an antiseptic in the villages, turmeric contains a chemical – curcumin - that has already been praised as a treatment for arthritis and dementia. But recent lab tests by a team at the Cork Cancer Research Centre show it can also destroy cancerous cells in the gullet. Medical experts said the findings published in the British Journal of Cancer could help doctors find new treatments. Dr. Sharon McKenna and her team found that diseased cells began to digest themselves within 24 hours of being fed curcumin. With casebook scientific caution, the good doctor opined: “Scientists have known for a long time that natural compounds have the potential to treat faulty cells that have become cancerous and we suspected that curcumin might have therapeutic value.” Another researcher, Dr. Lesley Walker, director of information at Cancer Research UK, was a little more pungent, adding: “This is interesting research which opens up the possibility that natural chemicals found in turmeric could be developed into new treatments for oesophageal cancer, the sixth most common cancer in the UK. Rates of this disease have gone up by more than half since the 1970s and this is thought to be linked to the widely rising rates of obesity, alcohol intake, and reflux conditions, so finding ways to prevent it is very important.”

Turmeric may also to be a weapon against Parkinson’s disease. Researchers at Michigan State University have found it prevents the clumping together of a very nasty-sounding ‘slow wriggling alpha–synuclein protein’ which is known to be the first step of the illness. Other research shows that curcumin attaches to cholesterol and prevents its ability to pass from the bowel to the rest of the body where it can do harm, and also helps the liver to eliminate any excess cholesterol. And not only does it reduce LDL (‘bad’ cholesterol) but it also acts to increase levels of HDL (‘good’ cholesterol). On top of that, this friendly little chap also helps keep the blood thin, thereby helping prevent blood clots and the risk of heart attack or stroke.

Another spice bringing some culinary zing into the sterile world of the laboratory is ginger. This is another root widely grown in Kerala, in fact, our English name comes from the Malayalam word inji. Every good cook here knows that, as Ayurveda has long recommended, a ginger concoction taken shortly before eating improves digestion. Quaint superstition? Science has now shown that ginger stimulates the production of saliva, which in turn enlivens the taste buds and makes swallowing easier, while its constituent chemical gingerol enhances the digestive power by increasing the motility of the gastrointestinal tract. Historically the root has always been used medicinally to calm stomach problems such as colic and indigestion, but now multiple Western studies also show it to be effective for treating the nausea caused by travel, morning sickness, and even chemotherapy. Other studies suggest it may also decrease the pain of arthritis and, like turmeric, have blood-thinning and cholesterol-lowering properties applicable to heart disease. Moreover, ginger may help combat cancer. Lab studies have shown gingerols prevent skin cancer in mice and a recent study, also from Michigan, demonstrated they can swiftly dispense with ovarian cancer cells.

Several other common curry spices are being shown to have medical benefits. Too much chilli may burn your mouth but, paradoxically perhaps, it is a very effective pain killer and contains capsaicin which has been shown to be a powerful anti-inflammatory, a relaxant, and an aid to digestion as well as significantly reducing the levels of sugar in the blood. Cinnamon, the sweet spice that goes so well with apple dishes, also helps the body manage cholesterol and blood sugar levels and helps improve the circulation, thereby reducing the work the heart has to do. Trials have shown it to be beneficial to those suffering with Type 2 diabetes, as well as being an aid to weight loss. As well as keeping witches and vampires at bay, pungent garlic adds spice to most folk medicine systems around the world as a powerful anti-fungal, anti-bacterial and anti-viral agent. We now know that it too is useful in acting to reduce cholesterol and lower blood pressure by its blood-thinning properties. Cumin helps digestive disorders, reduces flatulence, indigestion, diarrhoea, nausea, morning sickness, and heartburn. In Indian villages, it is mixed with water and applied to boils. Last but by no means least, coriander, whose leaves end up garnishing most Indian dishes, acts as a modifier of digestive function by breaking fat down effectively and thereby preventing stomach upsets; it also seems to reduce urinary tract infections.

If all that wasn’t a tasty enough prospect, news just in from Pennsylvania State University finds heavily spiced meals may do the heart good by decreasing triglycerides – “a type of fat that in elevated levels is a risk factor for heart disease," explains researcher Sheila West. Intriguingly, her study found that these decrease by about a third with the use of turmeric, cloves, ginger, and paprika in a meal even when that meal is itself rich in oily sauces and high in fat. This sounds deliciously like being able to have one’s curried cake and eat it. Spicy meals also reduce insulin levels by about 20%, which is good news for diabetics, whose numbers are currently increasing rapidly throughout the West.

Back to turmeric – the very latest news is that it could be the new sniffer dog to detect hidden explosives. Eh? Well apparently, as turmeric absorbs molecules of explosive material from the air, changes in its natural light-emitting properties can be measured. This phenomenon of light sensitivity, known as ‘fluorescence spectroscopy’, is already employed in a wide array of sensing and analysis techniques. But it could be particularly useful in the case of explosives, many of which are hard to track down, particularly TNT, which is the ultimate needle in a haystack. As turmeric researcher Abhishek Kumar recently explained to the assembled boffins at a seminar organized by the American Physical Society: "If you have a gram of TNT, and you sample a billion air molecules from anywhere in the room, you'll find only four or five molecules of TNT - that's the reason it’s so hard to detect”.  Pretty well impossible, I’d say. Anyway, Abhishek’s team at the University of Massachusetts, funded in part by the US government, is already in discussions with a company to utilize turmeric’s natural absorbent qualities in a portable explosive detector device. So this tasty little yellow root, along with its fellow spices, looks like being a life-saver in many more ways than one.