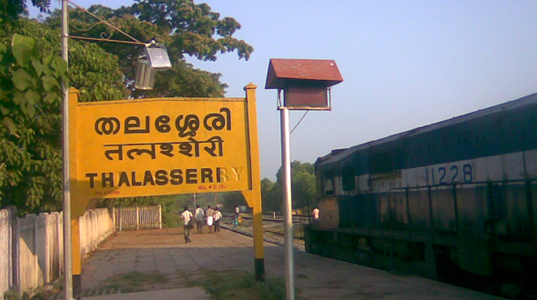 Tellicherry, formerly known as Thalassery, is a little town with a big history about 80 kms down the coast from The Hermitage. The British first established their presence here in 1682, obtaining permission to settle from the local prince. The town soon became a springboard for the fledgling East India Company in Kerala and rapidly developed into an important base of the EIC and major spice-exporting port. Particularly prized was the local ‘pepper’ - our word derives from the Malayali pippali. In those days spices were not just an optional taste-enhancer.  In Europe cattle were slaughtered each autumn and spices were used to preserve the meat over the winter and disguise the taste when it went bad. So valued were spices that they became a form of currency (hence the expression ‘a peppercorn rent’) and income tax could be paid with them. Fragrant bunches were included in nosegays to mask the odours of the street, and in the mid-seventeenth century, put into the ‘plague masks’ that were believed to protect the wearer from the dreaded pandemic. Less dramatically, ‘Tellicherry pepper’ is still considered the best today and is much sought after by chefs around the world.

One of Thalassery’s celebrated residents was the German scholar and missionary Hermann Gundert, whose statue still stands in town. He was one of those early travellers who took India to their heart. On the sea voyage out to preach the Gospel, Gundert passed the time by learning Bengali, Hindustani and Telegu. Later he mastered Tamil and eventually spoke nine Indian languages. Settling in Kerala, he went on to produce the first English-Malayalam dictionary (1872), translate the Bible into Malayalam, wrote twenty books in that language and founded the first Malayalam newspaper. He did colloquial research just by hanging around the bazaar with his ears wide open, and would often go into the market and deliberately start an argument by accusing a shopkeeper of over-charging or a short-changing him. Then he would quickly scuttle home to jot down the colourful expressions his little ploy had unleashed.

No doubt better known than Gundert is his grandson, the Nobel Laureate novelist Hermann Hesse. The author often spoke of his grandfather’s imbuing him with a sense of universal tolerance and a love of India and things spiritual. Both Hesse’s parents had been born in India and did missionary work there. Hesse wrote many books to do with the inner life, the most celebrated of which was Siddhartha, a novella set India and based on the life of the Buddha. It became something of a minor classic, and in 1972 the underground filmmaker Conrad Rooks turned it into a movie, which was mainly shot in Rishikesh on the Ganges, where the Beatles had studied meditation with the Maharishi a few years before. The film starred the leading Bollywood heartthrob of the day, Shashi Kapoor, as the young prince who renounces his throne to seek enlightenment, and contained a female nude scene which caused considerable controversy at a time when the Indian film censors did not permit even kissing on screen. Siddhartha has been translated into Malayalam and Sanskrit by the local Hesse Society, which has plans to publish editions in all of the Indian languages. Each year there is a literary get-together between the Malayalam members of the society and their European counterparts.

Thalassery has three firsts to its credit. Lord Arthur Wellesley, then Governor of Bengal introduced the game of cricket to the subcontinent here, via the British soldiers garrisoned in the EIC fort. India's first cricket club was formed here, and a decent pitch laid in the 1890’s by a local tea-planter called Cowdrey. He was mad about cricket, and named his son Michael Colin Cowdrey so he would have the initials MCC, after the world’s most famous cricket club. Colin went on to become one of the greatest all-round players ever to wear the England colours.

The second first is the Indian circus, which was born here. Kelleri Kunhikannan, a local gym teacher in Gundert’s mission school, was so taken by a visiting circus that he made a deal with its owner to supply its acrobats from among his students. He set up his Circus Training School in 1901, and from then on the town became synonymous with circus skills. Performers and trainers from here are still very much in demand all over the country.

And then there are the cakes. It was here that Indians first learned to enjoy European-style patisseries, made for sweet-toothed British ex-pats, especially at Christmas. Thalassery cakes are still considered the best today. In 2020 the world’s longest cake was created nearby – a chocolate extravaganza that took around 1,500 chefs and bakers nearly four hours to create, using 12,000 kilograms of sugar and flour. The event was organized by Bakers Association Kerala (BAKE). and the Guinness World Records assessed the cake as measuring 6,500 meters in length.

Cricket, circuses, and cakes: together they have given this little place, with its attractive harbour and bobbing fishing boats, the title of ‘the town of the three C’s’. But, considering the Colin Cowdrey connection, perhaps that should be amended to five, or better still, a sixer?