Cutting the cost of fishing. 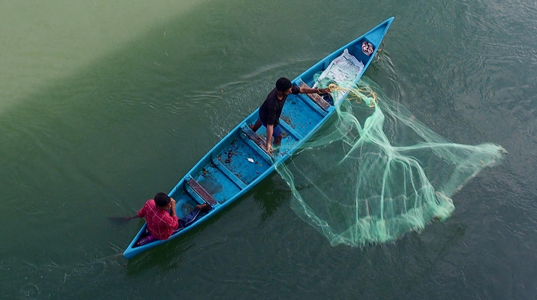 For the maritime communities of India’s southern state of Kerala, risking life and limb is part of everyday life. As fish stocks deplete in coastal waters because of overfishing and shoals migrate due to water temperatures changing with the climate, fishermen have no option but to venture ever further out to sea on small boats, flimsy canoes and catamarans. These modest craft are prone to accidents, especially during the regular turbulence of the monsoon season with its heavy rains, stormy seas and high winds from June to August, let alone the increasingly regular heavy storms such as the cyclone of December 2017. The absence of navigational aids, radio communication or safety devices heightens the risks, turning many trips into do-or-die affairs. But now a UK-based radio is stepping in to help.

Radio Monsoon, a collaborative project that grew out of the University of Sussex, is designed to use a low-tech forecast service to ensure safer working conditions among 30,000-plus fishing families in Kerala. During its pilot run, Radio Monsoon provided daily forecasts in the local language of Malayalam, specifically tailored for 10 fishing villages along the 80 km stretch of coast around the state capital Thiruvananthapuram. These areas are particularly vulnerable to bad weather and natural disasters.

Based on data from India’s national meteorological department and the centre for ocean information services, as well as local knowledge, Radio Monsoon’s forecasts are disseminated through social media, loudspeakers placed in harbours and by simple word of mouth. Fishermen can also access forecasts over a phone line supported by an internet server. Their feedback is collected regularly and relayed to the forecasters so that the information can be adapted to their needs.

Maxmillan Martin, who is from Kerala and is now a research associate at the British university, first had the idea for Radio Monsoon in collaboration with friends after the devastating tsunami of 2004. The group – a retired teacher, a journalist, a user interface designer and a social media expert – were all from Kerala. They came up with a narrowcast system whereby forecasts recorded on to CDs would be played in the harbour. “It was a very low-tech intervention but the fishermen loved it and the local forecasters did too,” says Martin. “It worked, but we went on with our lives.”

Martin, who has a background in geography, resurrected the idea while doing his PhD, entering it into a competition for innovation funding. A full-blown pilot followed in 2014, and kept going on a shoestring budget until 2016, when funds ran out. The team now plans to relaunch and expand the project, monitoring its impact on fatalities and the search and rescue operations that currently save about 3,000 lives a year.

Before Radio Monsoon, there was no widely used local and regular marine weather information service for local fishing communities. Fishing communities are well organised with union membership, and can earn well from the prices their catches yield; fish fetches more in the market than chicken and is eaten at least once a day by most Keralites. But this money is made from fishing hauls in a limited season, and with families reliant on it, a culture of risk-taking has emerged by default. And as Martin points out, fishermen do not always heed advice, especially since their livelihood depends on their going out to fish whatever the weather. “They told us they just take their gear on to the boats and nothing for safety, because they believe they just need to be able to swim. If they are good swimmers, then they can do it; if not, the attitude was ‘Well, that’s just too bad.’ They are not really afraid because it’s just part of their lives. The way they perceive risk is totally different than how we do.” The potential dangers are increased as often the boats have to venture out 70 – 80 kms from shore to contact shoals of sufficient size to make the trip worthwhile. In the old days, people navigated by the stars, but the skill has been lost. GPS and the likes of Radio Monsoon, look like being the best hope for safer fishing in the future, at least throughout the rough summer months each year until September, when the sea becomes calmer once more.