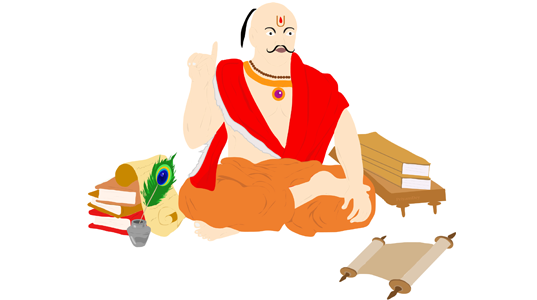 Anyone who reads Indian newspapers will have come across two little words with rather big meanings: lakh and crore, which refer, respectively, to 100,000 and 10,000,000. Such huge figures commonly used will be unfamiliar to non-Indians, as is the placing of their commas. For example, ten million is written 1,00,00,000 in India, because it refers not to 10 units of ‘one million’ (i.e. 10,000,000) but to one unit of ‘ten-millions’, so the comma comes after the 1. But if you thought such figures marked the limit of the subcontinental affection for large numbers, think again. And again.

Consider her earliest speculations on time.  According to the ancient sages, our universe passes through endless cycles of manifestation, dissolution, and re-emergence. Each cycle is comprised of four successive ages. Longest and best is Sat Yuga, the ‘Golden Age of Truth’ when human life is lengthy, happy, peaceful, and prosperous and all of natural life is in harmony with itself and the Divine. Then follow, progressively diminished in every way, the Silver and Bronze Ages. Last and worst is the ‘Age of Kali’ when life is nasty, short and brutish. Sad to say, (but perhaps not unexpectedly) we are currently smack in the middle of this degenerate ‘Iron Age’, but fortunately, as it lasts only a quarter of the Golden Age, it is destined to run for a mere 432,000 years. What’s not to like?

The ancients calculated time itself to stretch from its smallest unit, the infinitesimal truti which lasts a millionth of a second, up to the largest, the mahamanvantara, lasting no less than 311 trillion years. Modern cosmological theories are only just beginning to catch up with such magnificent concepts.  It was also metaphysical concerns that gave birth to a sacred geometry used to calculate the size and construction of fire altars used in the ritual worship of the Vedic gods. This in turn led to a science of mathematical proportions. A sage called Budhayana, who also calculated the value of pi long before it was known in Europe, was the first to introduce a mathematical way to calculate the hypotenuse of a right-angled triangle, perhaps two centuries before it was introduced by Pythagoras into Greek thought in the sixth century BC. As early as 800 BC we find texts that give individual Sanskrit names for each of the powers of 10 up to 1062 (i.e. 1 followed by 62 zeros). Some of these mega numbers had a theological tinge: 10 to the power of 17 was a parada ‘half way to heaven’, while a yaju was ‘the distance a god could travel in half a year’. This passion for conceiving and naming huge numbers is further evinced in the Lalitavistara Sutra, an account of the life of the Buddha dating from about 200 AD. It describes a contest that includes writing, wrestling and archery, and also arithmetic, in which the Buddha is pitted against the great mathematician of the day, Arjuna. Challenged to name all the numerical ranks beyond a koti (107) the enlightened one begins by casually listing the powers of 10 up to the tallakshana (1053). But he then he goes on to explain that this is just one of a huge series that can be expanded geometrically. Some of the numbers sound rather playful: 1070 is an ahaha; 1077 an ababa, 1084 an atata. Then, after going through nine successive counting systems he finally arrives at the dhvajagranishamani, a suitably serious name for the stonking 10421 - i.e. 1 followed by no less than 421 zeros! Not surprisingly, at this point Arjuna bows his head in defeat with the admission: “It is you oh Buddha, not I, who is the master mathematician”.

But the greatest of all conceptual leap in the history of mathematics was another Indian invention: the use of zero as a number in its own right. Zero revolutionized mathematics. It accorded well with Hindu metaphysics in which the Absolute is known as shunyata – an abstract noun that stems from a verbal root that means both ‘full’ and ‘empty’. Such a paradox is surely appropriate to describe the enigmatic power of zero: empty in itself but containing unlimited potential. Shunyata is conceived as the immaterial base of the material world - the no-thing that is somehow the something that is everything. In the seventh century the sage Brahmagupta had penned a treatise extolling the multiple virtues and uses of zero; the first working evidence is found in a wall-carving in a temple in Gwalior fort, dating to 875 AD. Typically, it occurs in a list of offerings to be given to the presiding deity Vishnu, in this case ‘50 flower garlands’.

Not only zero, but also the counting system employing 0 to 9 that we call Arabic numerals came originally from India; in the Middle East itself mathematics is still correctly called ‘the Indian art’. Indians also invented the decimal system, which revolutionized the ease and speed of counting, condensing calculation by introducing a positional value to recording numbers. This way you only need 7 digits to represent all the numbers up to a million. The system was introduced into Italy by Arab traders in the late middle ages; it replaced the cumbersome Roman numerals and thereby gave a huge boost to the economic entrepreneurship of the city states that went on to finance the European Renaissance.

But even decimals were only one option for early subcontinental calculations. From at least the 1st century BC Indian mathematicians also employed binary numbers – sequences of only two symbols, 1 and 0 - rather than the ten required in decimal representation. This advance again was spurred by theology, as we first encounter it in the authoritative Chhandah shastra where the sage Pingala used binaries to classify the different musical metres of the texts recited to accompany Vedic religious rituals. His numerical shorthand is the basis of information storage in modern-day computers. Albert Einstein, who was no slouch in such abstruse matters, commented perceptively: “We owe a lot to the Indians, who taught us how to count, without which no worthwhile scientific discovery could have been made.”

A mere layman might naively imagine that the ultimate in large numbers was the concept of infinity.  However, since the 19th century, mathematicians have posited what they call ‘transfinite numbers’, i.e. numbers which are not only greater than any finite number, but also, somehow, larger than infinity itself. (Don’t ask). But these impossibly large abstractions, varieties of infinity, were not the invention of Victorian Europeans as transfinite numbers had first been mooted by Jain monks in India as far back as 400 BC. So, given the astonishing reach of Indian mathematics throughout history, perhaps those everyday lakhs and crores now seem pretty easy to manage.