The Way of the Way 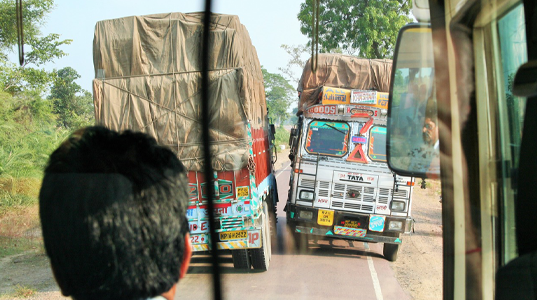 Those normally staid ivory towers of academe are buzzing with an unusual frisson of excitement these days. It has just been announced that an ancient yoga text called Marga margasya (‘The Way of the Way’) putatively dated mid-8thcentury AD, was recently discovered by an intrepid mountaineer in a remote cave in the high Himalayan vastness of Tibet. Experts believe this document will shed invaluable light on customs that continue to influence the remarkably creative habits of Indian road users. Thanks to prolonged and intricate negotiations with the relevant authorities, we are now able to publish the text here for the first time, translated from Sanskrit by our Cultural Director:

Verse 1: As we are in truth the immortal spirit masquerading as a physical body, so all road users should drive accordingly.

Verse 3: As only the strong succeed, so for a wheeled vehicle to slow down is to show weakness, to brake is to fail and to stop is to accept a miserable defeat.

Verse 4: As sound is divinely creative, being a partial manifestation of the cosmic mantra OM, so using the horn is a compulsory duty, as:

a) Cars: Short blasts (urgent) indicate supremacy, e.g. in clearing dogs, rickshaws and pedestrians from the path. Long blasts (desperate) denote supplication, e.g. to oncoming truck: ‘I am going too fast to stop, so unless you slow down we shall both die’. In extremis, they may be accompanied by flashing of headlights (frantic). Single blast (casual) means: ‘I have just seen someone out of India’s 1200 million-plus inhabitants I recognise’; ‘It is Lord Krishna’s birthday soon’ or ‘I have not blown my horn for several minutes and am missing the noise’.

b) Trucks and buses: All horn signals mean the same, i.e. ‘I have a full weight of about 12.5 tons and have no intention of stopping for anything whatsoever, even if I could’. This signal may be accompanied by turning headlights on full in the face of the approaching vehicle.

Verse 5: As the action of the enlightened is a spontaneous flow in ‘the now’, so all maneuvers and evasive action shall be left to the last possible minute.

Verse 6: As guests are always to be rightly honoured, so car occupants shall substitute safety belts with the more decorative garlands of marigolds. By tradition, these are to be kept unfastened at all times.

Verse 7: As we should always follow the noble Middle Way laid down by our teachers since ancient times, so traffic shall not drive on the left, nor on the right, but in the centre of the road.

Verse 8: As the round of worldly life known as samsara is an illusion, so roundabouts do not really exist in Bharat. Apparent traffic islands appearing in the middle of the road should be ignored as a sensory hallucination unhelpful to the true understanding known as nirvana.

Verse 9: As all life is evolving to ever greater heights, so overtaking is compulsory. Every moving vehicle is required regularly to overtake every other moving vehicle, irrespective of whether it has just overtaken you. Overtaking should only occur in auspicious conditions, e.g. in the face of oncoming traffic, on blind bends, at junctions and in the middle of village and town centres on market day. No more than two inches should be allowed between you and the other vehicle; one inch in the case of bicycles and pedestrians.

Verse 10: As meditation and prayer are essential to the spiritual life, so all true seekers should close their eyes for regular periods of contemplation whilst driving, so as to keep on the one true path.

Verse 11: As life does not go backwards, so no vehicle in Bharat should employ a reverse gear move when faced with an impassable situation. Sitting it out patiently like a valiant warrior astride his elephant will eventually yield the desired resolution.

Verse 12: As God moves in a mysterious way, so Kalki, the final incarnation of Lord Vishnu as the divine destroyer, may well come in the guise of a Kerala State Road Transport bus careering maniacally along one of her National Highways in its frantic bid to meet an impossible timetable deadline.